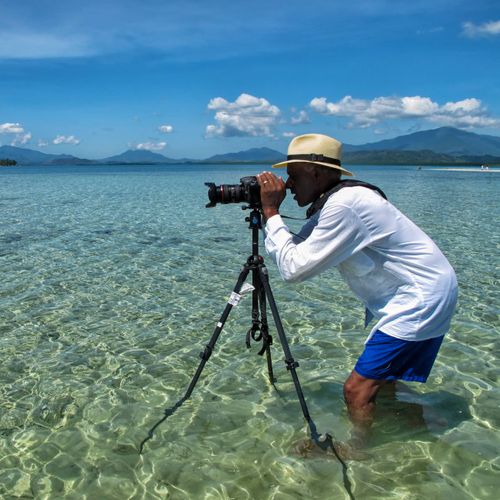 My parents gave me my first camera when I was ten or eleven. I found it interesting but not exciting. It collected a lot of dust over the years. 20 years later I bought a manual Minolta film camera. I thought it was a great idea at that time but found I did not have the patience for a manual camera and it was even worse when I went into the dark room to develop the film. I contribute my lack of inspirational photography to pure laziness.

25 plus years later I bought a digital Canon G2 with a flip out rear LED viewing screen. There was some photography excitement in my mind with digital since I was starting to travel. Some 10 years later after my Canon G2, I began to understand and appreciate the fine art of photography and what I had missed out on by not having the patience to photograph with a film camera. After buying a state of the art DSLR professional camera, I enrolled in a photography school. My knowledge and excitement grew in leaps and bounds. Buy the way, I bought two film cameras, one being a medium format and a 35 mm. I then understood how special film was when printed on on Silver Gelatin paper.

As the excitement continued to mushroomed, I became fascinated with the ability to shape light. My day job was in the operating room where the overhanging lights used during surgery created a new dimension of speculum light. To be able to take this light outside and apply it too whatever I wanted to photograph gave me more ideas, which brings me to where I am today. Photography has continued to excite me in every aspect from my extended adventures to 6 continents and beyond. I’ve grown to appreciate the many conversations I’ve had with those I’ve photographed. Their excitement and enthusiasm in having someone from another country pose them and their family for a photo and seeing their photo with the backdrop being the sprawling rice patties in Bhutan, the Philippines or the Serengeti.